BIKING FOR KIDS UNDER FIRE

Help support Israeli children’s emotional and physical health and response to trauma through our safe biking program for children living near the Gaza Strip.

Children throughout the world are caught in the crossfire of conflicts not of their own making. In Israel, along the long border with Hamas-run Gaza, young children in villages have watched and heard rockets land close by their homes, schools, bus stops, and stores. They can see the white streams sent off from nearby Gaza and know only too well, that rocket fire is meant to kill them. They’ve got 30 SECONDS to run to a bomb shelter and the rest of the day and week to wonder when it will happen again.

We here at ActionIsrael in Denver, Colorado are grateful that our children do not face such circumstances, and we are worried about the Israeli children who do.  We wondered what we could do to help and came up with the idea of giving these children a way to have some safe, outdoor fun which would hopefully reduce their anxieties and stress and give them a sense of some control and empowerment.  Five years later we can report on four successful, safe biking programs existing in small Israeli villages along the Gaza border. One young boy says: “When I ride my bike my mind is free to think of other things than the stress.”  One parent says: “The children experience independence and learn skills, strength, discipline, friendship and more. They have a time when they are not thinking about war, sirens, and rockets.”  The staff leader of one of the clubs writes: “We are fighting back against fear and anxiety by teaching the kids to be the sovereign of themselves.  We believe we are helping them build resilience in a situation they cannot change.”
Biking Clubs, Stories, and Slideshows 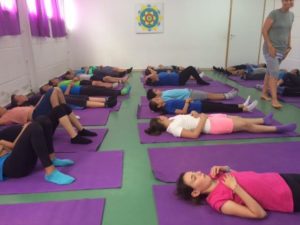 HELP FOR KIDS WITH PTSD

As a result of the trauma experienced by the children living along the Gaza & Egyptian borders many suffer from PTSD. The school in the Eshkol region is close to both borders. The children, parents & teachers are stressed to the limit. The school results reflect this having gone from the 80th percentile to the 10th percentile in the country. They have had 7 principals in 8 years.

ActionIsrael has raised over $70,000 during 2015 & 2016 to support the stress reduction programs at the school. The Ilan Ramon Foundation is also involved as they work with youth at risk, & Israeli pilots from the near bye air base mentor the children.